Carnival is such a big celebration around the world. In fact, it has also become a big tourist attraction in some countries; I am sure that everyone is aware of the Venetian or Brazilian Carnival. Cyprus is also a place for carnival celebration, and specifically the Limassol Carnival is considered one of the major events of the year for both locals and visitors. It is something that Limassolians are immensely proud of, since their city kept this tradition for almost a century. However, it is not incidental that the carnival is being celebrated in this small island and with such intensity. It actually dates back to antiquity and is closely linked to the ancient pagan rituals and festivities celebrating the coming of the spring, and which were dedicated to the ancient cult of god Dionysus, the god of wine, festivity, pleasure and fertility; in other words, the god of partying!

Visiting the carnival in Limassol one can witness the excitement of the community coming together in a cheerful atmosphere to celebrate, dress up in various characters and have fun. This year the Grand Carnival parade began with the cheerleaders, samba drummers and a sexy Brazilian dancer, followed by the lively and cheering Carnival king on his throne. The opening of the parade was then followed by endless groups of people of all ages dressed up as bees, hippies, ninja turtles, American football players, convicts, sexy snowhites with short skirts –mostly men showing off their fake boobs and hairy legs, Egyptian pharaohs, and anything else you can imagine. People parading with a sense of pride, while some with a can of beer or a bottle of vodka in their hands, seeping secret shots in order to sustain their joy and excitement. It was indeed a blend of people who genuinely want to have fun, but also of people hiding behind their masks to unleash an array of personal issues.

The themes and costumes of the groups cover everything inspired from contemporary pop culture and current social issues, to Walt Disney characters and anything else of randomness..., but nothing genuinely communicating a sense of local culture, besides the Serenaders and possibly a 'vraka' (a man dressed up with a traditional folk costume). Having in mind the more sophisticated carnivals in Venice, Brazil or Patra in Greece, which have a unique cultural character and a more serious approach, I cannot help but wonder why in Cyprus, a country with such an rich heritage, we only present mainstream pop culture –no offense intended to the Walt Disney characters, we all love them, but it is not enough!

I witnessed again another aimless presentation, with no direction or a deeper sense of purpose. Yes, the carnival is about joy and celebration, satire and artistry, but it is also an opportunity to create culture and promote values, whilst also presenting ourselves as a nation to our foreign visitors. It is not an issue to be dealt lightly and should not only concern the city of Limassol, but the whole nation of Cyprus. Considering the financial contribution of this festivity to the local economy, is enough to realize how the Limassol carnival has potential to advance to another level. But this lack of culture in the carnival parade is not really the problem, but only a symptom to a much larger and deeper problem: the lack of a contemporary cultural identity in Cyprus, a country that is suffering from what I describe as a lost sense of self.

The topic of the contemporary cultural identity of Cyprus is a rather big subject, which I will be discussing in more detail in other blogs, so stay put. For now, I’m just giving you some food for thought, while remaining open to your thoughts and comments on this topic.

I should add though, that the Carnival King was probably the most exceptional character in the parade with a professional presentation. Well done on that! 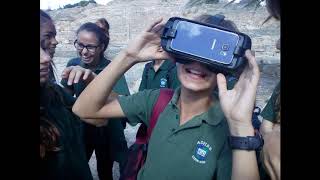